The science behind Solar: How does it work? 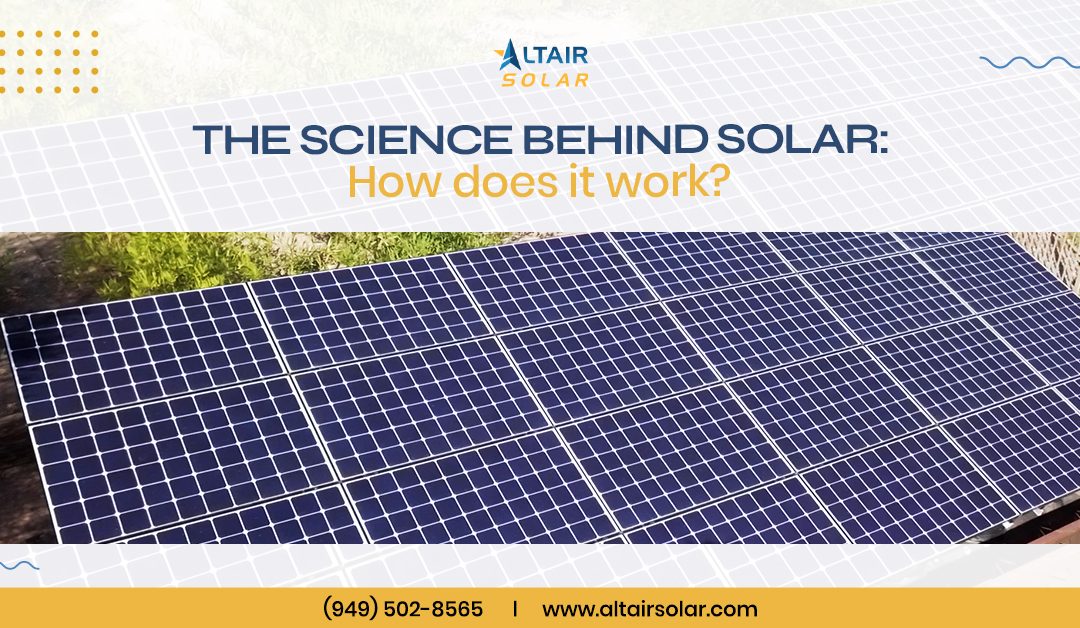 Solar systems are now an “it” thing. Everyone seems to be talking about them, but only a few know what they actually are. Solar systems run on solar power and are installed to save energy and for a sustainable future. Solar panels then convert the sun’s energy into electricity, which you then use to power your electrical appliances. But how do they actually work? That is a question which many of us want to know, as surely this can’t be all right? What exactly is solar and how does it work? Before you call in for a consultation, here’s exactly what you need to know about the science behind this amazing system.

What is Solar Power?

The conversion of solar energy, that is the energy present in sunlight, into renewable energy with the help of photovoltaics (PV) is known as solar power. All this power comes from the sun’s rays that are then converted into electricity. This electric power can then be used on any electric appliance that you have in your house or office. While all this might make it sound like a tedious process, in reality, it is a lot more simple. Technology has gotten quite advanced due to which all this conversion happens instantaneously, which means that you don’t have to wait or worry about your appliances dying on you, due to lack of electric power to keep them running. Solar power is a form of renewable energy because it is constantly being replenished by the course of nature. Unlike fossil fuels, solar energy is abundant and clean, due to lower emission of carbon.

All this makes it safer for the environment and the ultimate solution to combat climate change.

Solar power system for home: the complete process from energy generation to transmission?

Now that you know what solar energy is, it is crucial that we discuss the nitty gritty behind the working of a solar system. A solar system consists of solar panels that start working the minute they are exposed to sunlight. The solar panels absorb the sunlight and create an electric current. The electricity produced, flows into a conductive wire and from there on, it moves to the inverter, where it is converted from DC to AC, so that all appliances can work with it.

The AC power is then moved to the electric panel, from where the electricity flows into the property. Any excess power created that is not used, is stored into the electric grid to be used later on, or to be sold to the electricity utility company. This entire process happens at the speed of light which is the speed of electrons without one having to wait!. So by the time you wake up and go to the kitchen, your coffee machine will be ready and powered up to make you a steaming hot cup of your morning coffee.

This is a basic explanation of how solar energy is converted into electricity, within an instant of time.

Efficiency of a solar system:

Many often question the efficiency of a solar system as they believe it to be weak, since it comes from the sun. Well, that is a myth which we are about to bust. Solar power is extremely efficient and is equally as powerful as the electricity generated at the grid. From warming up your water, to running your air conditioners, solar power is capable of doing it all. Plus, the amount of sun rays that falls on the Earth in one hour, are way more than the energy consumed in one day, making it the ideal choice for all of us. Plus, that isn’t the only way solar energy is efficient.

You can save up to 50 to 80% of your monthly electricity bill with the right system installed in your property. Amazing right? As if this wasn’t enough, the value of your property also increases if you have a solar system installed. So, think of it as a long term investment. You aren’t just doing yourself  a favor, but are also leaving a cleaner, and safer future for your future generations by protecting the earth against dirty energy, caused by the exploitation of fossil fuels.

The benefits of solar energy on the climate:

There are numerous benefits of getting a solar system installed. While the benefits for an individual are many, there are also tons of benefits for our planet.

Renewable energy has been used by humans since ancient times. Using the heat emitted from the sun has always been used to warm water, whereas wind has been used to move turbines and produce electricity. The reason why solar energy is preferred over any other form of energy is because it is abundant and is easily replenished. There is no fear of it running out, or damaging the planet. The entire process of the conversion of sun rays into electricity, produces no carbon which is great for the environment. However at the very same time, the burning of fossil fuels to produce electricity, leaves a huge carbon footprint that has now led to the drastic climate change that our planet is going through. At a time when animals are getting extinct, polar caps are melting and droughts are becoming more common, it is high time that we invest into renewable energy to reverse the damage that we as humans have caused to this planet, while being blinded by our comfort and ease.

You might have heard a lot of myths related to solar energy but all of those myths exist only when there is a lack of knowledge. There is still a lot  to be done to help people understand the science behind solar and how it actually helps us as an individual as well as a community. If this blog has sparked an interest in you, make sure you dwell deeper into the world of solar, and visit our website to see how the whole journey from the inspection to the installation comes into play with Altair Solar, especially in Southern California. No matter what people day, one thing is for sure. Solar is the future of energy as it is cleaner and more efficient in the long run, as proved by Science itself, since it goes in accordance with the laws of nature.